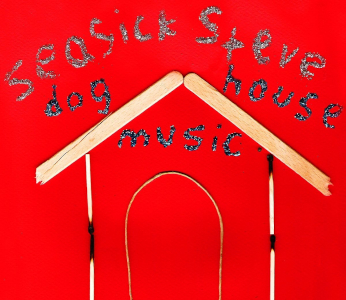 When I was a teenager, blues was my thing. I listened widely, but blues was always my go-to. I loved the electric stuff like Muddy, Howlin’ Wolf and John Lee Hooker, and the older acoustic stuff of Robert Johnson, Lonnie Johnson and Blind Willie McTell. I was even into the early periods of blues revival – like Led Zeppelin’s early stuff that we heard yesterday. But anything after that left me cold. When I thought of blues from the 70s onwards, it was all blues-rock guitar wankers such as Stevie Ray Vaughan, Joe Bonamassa, Johnny Winter and the like. Extremely technically proficient all, but (for me) completely anodyne. It was really disappointing to me that all of the ‘good’ blues was gone, put out of my reach by time. And then, at the Big Chill Festival in 2006, that changed with Seasick Steve. 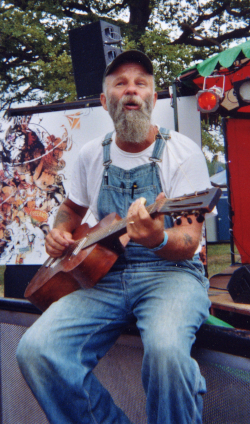 On a stage just about big enough for a chair, a couple of guitars, an amp and a stomp box, a man with a big beard, denim dungarees, tattoos and a farmer’s tan came on stage and played the blues. Not in a soulless, boring way like the blues-rock dudes, and not even copying the old masters. He had his own style, heavily influenced by players such as Mississippi Fred McDowell and Son House, but also with small elements from country music and even shades of punk. Everything was rough around the edges, from his homemade stomp box to his tattered trucker’s cap and especially his electric guitar, a cheap Japanese original in red, decorated in Sharpie and glitterpen and – crucially – with only three strings, tuned wrongly and in the wrong place and played with a slide. His songs and stories all told of a life hopping freight trains and living the hobo life across the great American continent. After a while, he abandoned the tiny stage altogether, taking his acoustic guitar and jumping into the modestly-sized crowd (I took that picture!). I was hooked.

It’s been a long time since I last listened to this album, and it’s still as great as it always was. Just like that first time I saw him live, Dog House Music is completely solo (well, almost) and incredibly intimate. It was recorded in his kitchen on an old four-track recorder, and it feels like you’re right there. You can hear the squeaking of his rocking-chair and the patting of his foot on the ground; he even addresses the listener with story fragments and quips, and it all adds to the real down-home atmosphere. And the songs are to die for. He covers a surprising range: he does right barn-stomping plugged-in pieces with his three-string trance wonder, such as ‘Dog House Boogie’, ‘Cut My Wings’ and even the second half of ‘Fallen Off a Rock’, where he’s even joined by his son on crashing drum kit, but he also has surprisingly poignant and touching moments, such as ‘The Dead Song’ and the beautiful ‘Salem Blues’.

His guitar technique is exciting, his songs and stories are fun and hey – I’d finally found blues music in the 21st century that didn’t make me cringe. This was great! Of course, no-one would ever heard of him…so it was a (pleasant!) shock to see his rise to unexpected fame over the next few years. Future albums would peak at #4 on the UK album charts, he played the Pyramid Stage at Glastonbury, performed and recorded with everyone from KT Tunstall and Ruby Turner to Nick Cave, Dave Grohl, John Paul Jones and Jack White, and even appeared on Top Gear. So weird. And for me personally, he also opened up a whole world of not-shit modern day blues, from the old-style musicians like C.W. Stoneking to the punk of the White Stripes, Dogbreath and Bob Log III, and to whatever it is that Son of Dave does.

Yes, a lot of Seasick Steve is an act. Whether he ever hopped trains or not is probably impossible to know, but his 20 years living as a hobo is far exaggerated at best – instead he pursued a moderately successful musical career as a session musician and producer (he even played with Zakir Hussain and Aashish Khan in the shortlived project Shanti – look, there he is on bass!). Maybe those rocking-chair squeaks were added afterwards for effect, who knows. But while those revelations maybe took something away from his mystique, nothing takes away from his music. Because in the end, it doesn’t really matter that Seasick Steve is a character. He is lovable, has funny, interesting and gripping stories and, with Dog House Music, a truly superb album of blues.
at August 14, 2019
Email ThisBlogThis!Share to TwitterShare to FacebookShare to Pinterest
Labels: Blues, USA

Buy me a pint!